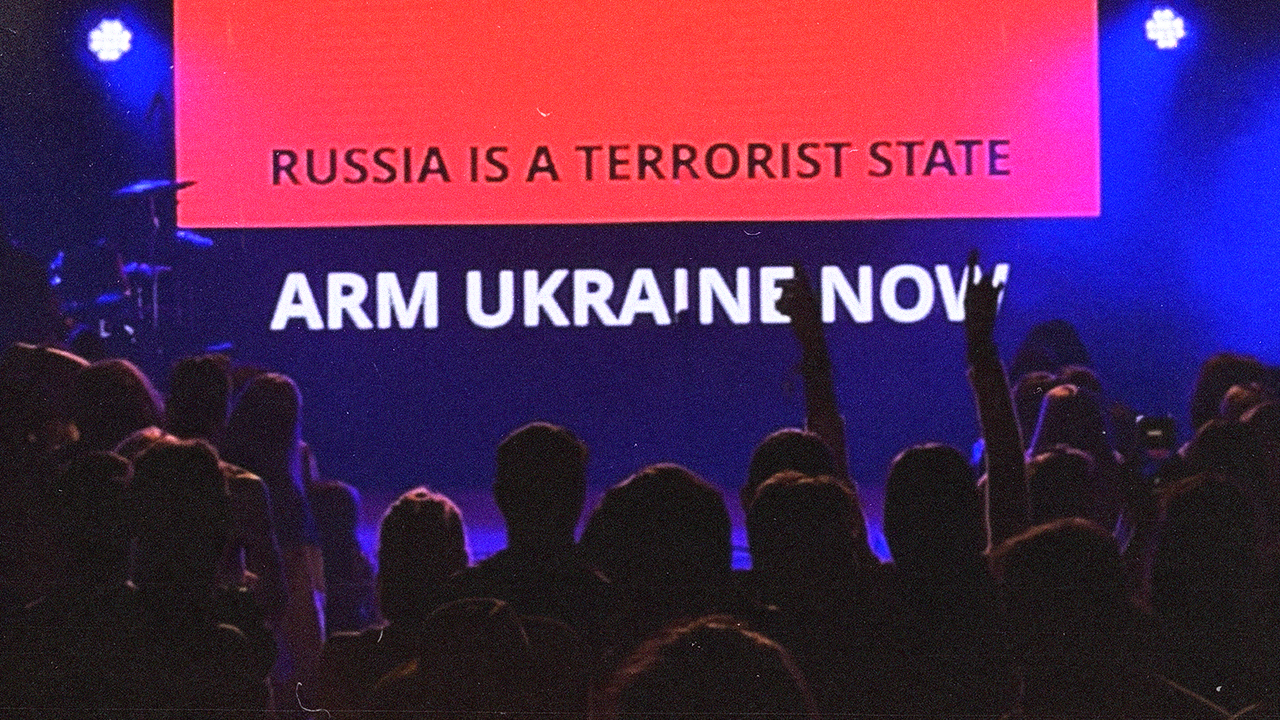 How Ukrainian artists performed at Sziget 2022

Long before and on the eve of the festival, there were fierce discussions about the expediency of Ukrainians participating in the festival in Hungary, whose government does not support Ukraine in the war with Russia, and because of the performances of three Russian artists at the festival.

The main arguments in favour of participating in Sziget were the opportunity to draw the attention of the international audience to the war in Ukraine; the importance of being uncomfortable in the den, not as an enemy, but not a friend; and the desire to show that, despite everything, Ukrainian music has something to demonstrate to the world.

We talk about some of the performances by Ukrainians at Sziget. We supplemented the material with the comments of Kateryna Voychuk from the Musician Defend Ukraine fund, which supports artists at the front. She visited the festival on August 14 with the Ragapop team, shared footage, and told us what she saw and heard.

Our artists would like to change the organizers’ mainset and the same of the European community in general.

In addition to the actual music and entertainment programs, there was a zone of so-called NGOs (non-governmental organisations) at Sziget. While negotiations with the organizers, the Ukrainian delegation agreed to set up a Music Saves UA site from the All-Ukrainian Association of Musical Events with truthful information about the war in Ukraine and photos of the consequences of the Russian invasion. It was also possible to donate to volunteer initiatives. Many people gathered near the Ukrainian tent, says Kateryna. The volunteers told them about the meaning of the posters and about the Ukrainian participants in the festival, and invited them to performances.

Katya also managed to talk to the programme director of the Magic Mirror stage, where Ragapop, Constantine, DJ Miura, and E.Lina performed on August 14. About the fact that never has Sziget given so many slots at the same time to artists from one country, and that the position of Hungarians and the country’s authorities should not be combined.

” He said that Sziget’s position regarding Ukraine is “very strong”: Russia is definitely a terrorist, Hungarians support Ukraine, and one should not combine the government’s position with the society’s position: “These are different things.”

He said that yesterday the performers were Russians by origin, who have been living in Germany for a long time and for the past few years had come to the festival with an anti-imperialist stance towards the Russian government. They believe, like the organizers, that this is also their contribution to supporting Ukrainians in the struggle. They seek to show the situation from different angles without justifying any of Russia’s actions.

Our artists explained that such a position is categorically unacceptable for Ukrainians, and they would like to change the mindset of both the organisers and the European community in general. He commented: “Well, yes, you have a war. I can’t imagine what it’s like. I’m afraid to imagine. But it is difficult to explain to people here that there is a black and white world. You should enter through other methods. ” He explained for a long time how important it was for them to let Ukrainians express themselves with political slogans. That it is mandatory. I asked if the band had a statement on how they were going to communicate it”,

All Ukrainian artists at Sziget, which has always positioned itself as apolitical, had complete freedom in terms of the messages that would be heard from the stage, in the video sequence, and in general during their stay on the territory.

On August 10, the folk group Luiku performed as the first Ukrainians. Indie pop duo Krapka performed on August 13; KOMA. We managed to find some videos of them. Katya says that she met with the girls the next day — on August 13, they gave interviews to international and local media for half a day.

On August 14, on the main stage of the festival, the band KAZKA performed as a performer in the special segment “We Stand with Ukraine” before the headliner. Ukrainian refugee children also sang the songs “I cried” and “I’m Not OK” together with the band. This is what frontwoman Oleksandra Zaritska said on Instagram:

“Introducing us, the host said: ‘Look at your bracelets now! There is the word “freedom.” Freedom is what Ukrainians are fighting for every day now! ” Afterwards, people came up to us, not only Ukrainians, and thanked us.”

In the evening, performances by Ragapop, Constantine, DJ Miura, and E.Lina began at Magic Mirror.

Ragapop on Sziget the day before yesterday. 500 people silently read, applaud, listen, and then rush to the tracks, where on the video ours convey greetings in chimars. and then these people cry to videos of destroyed cities. but we are not interested in that, we would like to discuss someone’s finger for another couple of days pic.twitter.com/E4GnAumigk

Katya recalls that, despite the “crap”, the message of Ragapop scared people off:

“At the beginning of the performance, the hall was full, about 500 people. They carefully watched the video at the beginning, which talked about why Ukrainians do not tolerate Russians and about everyone’s responsibility. It was felt by the reactions to the phrases in the text that the audience shares and supports.

There was a section of the audience that left after the first three tracks. Then people came and stayed—on English-speaking and dynamic tracks. But it was difficult and inappropriate for people to listen to and watch the tyrant, so they were disembarked.”

Next in the video is Constantine’s performance. He focused public attention on the war and called for donations. However, the singer was criticised on the Internet for performing songs in Russian (at least one, judging by the video).

The video also shows that each performance of the Ukrainians ended in one way or another with a QR code on the screen, through which you could donate to the Music Saves Ua fund.

“After the performance, they talked for a long time with the curator of the stage.” He told the story of adding Ukrainians to the lineup and filling the schedules of each stage with our artists. He said that he and his colleagues were very interested in choosing Ukrainian performers for the stage and it was a shame that they learned about the diversity of our music only because of the war. And that this year was a turning point for him in getting to know different musicians, whom he himself will invite and advise other colleagues in Europe.”

On August 15, Alina Pash and Postman (a solo project of Kostyantyn Pochtar from the band 5 Vymir) performed at Sziget. The day before, there was a lot of criticism of Alina at the festival, given the scandals related to her participation in Russian projects as well as the story of the National Selection for Eurovision 2022. However, it can be said that Pash’s speech was politically charged.

Alina’s performance contained everything — from footage of the war and the “burning” of the Kremlin on the screen; cutting and tearing a joint photo of Vladimir Putin and the Prime Minister of Hungary, Volodymyr Orban (this action was especially discussed by the Hungarian mass media); talks about freedom and struggle; calls for the cancellation of Russian culture; and even turning on the siren, which can be heard in Ukraine every day in almost all regions.

The singer showed the address of the Ukrainians who had previously visited Sziget to the Hungarians (the video had subtitles), where the following sounded:

Summarizing what she saw at Sziget, Katya Voychuk claims that people there actually know little about the war in Ukraine:

“Foreigners approached and asked: what is this about? Where are they from? And why are they saying this?” Well, people really don’t know about the events, and if they do, it’s very superficial. And when you tell, they scream.”

And instead of a conclusion, here are the thoughts of Ruslana Khazipova from Dakh Daughters and Ragapop in a conversation with Kateryna about what she and her bands have experienced over the past six months:

“We are currently going through difficult, painful, and tragic times, but being in Ukraine, despite the pain, we should not hate those who convince Europeans of our position. We are forced to do it diplomatically and using European methods because this is the only language they understand. It’s a shame, of course, because it arrives very slowly. Otherwise, there will be resistance and rejection. Treating us like Nazis and fascists is unacceptable. It is necessary to show that we are art, that we are civilized, talented, and know how to make art. Then they understand you through your profession and see in you a person they want to follow.

We understand that all of the conversations and interactions at this festival, as well as the hundreds of concerts that await them, are a drop in the ocean, but without these drops, nothing will happen, and you can foolishly halt the development of Ukrainian music and the transmission of our cultural messages to the West.”

The cover photo is VAMP.

The video in the material is from the Instagram accounts @alinapash and @imastah.