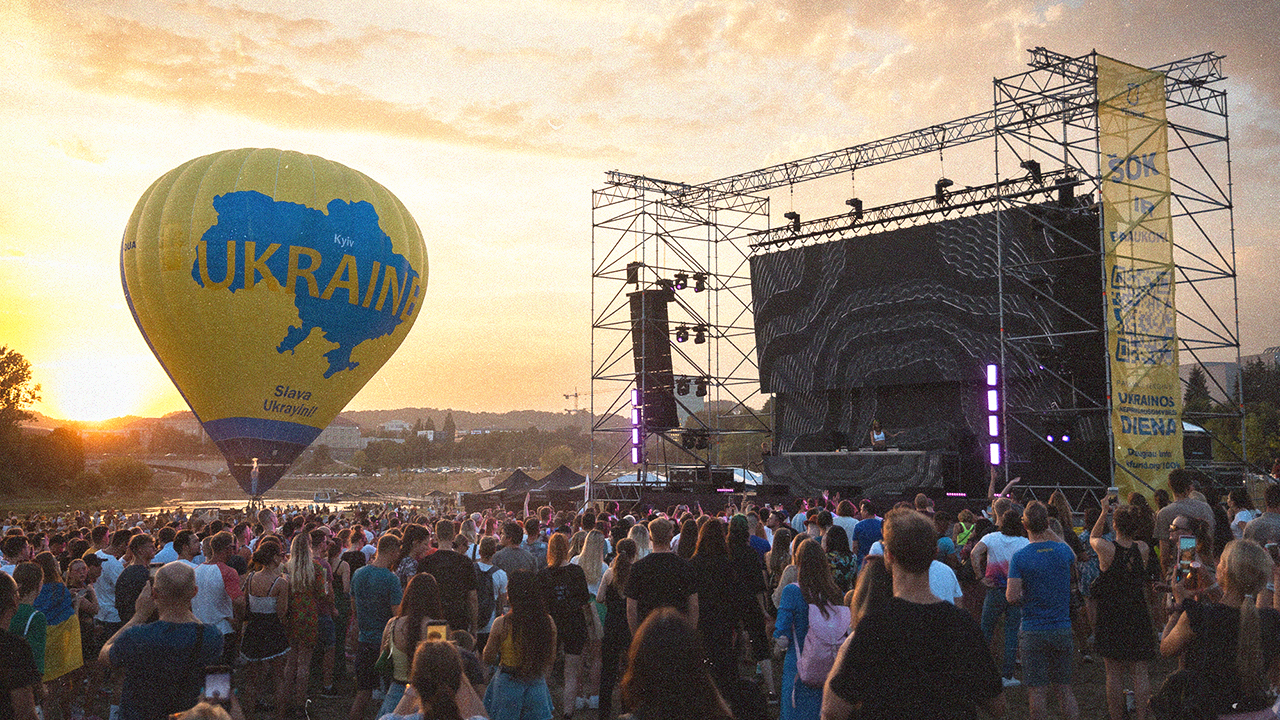 How Lithuania made Ukraine’s Independence Day its national celebration. Reportage

On August 24, Vilnius hosted the celebrations for the Independence Day of Ukraine. Several Ukrainian DJs performed in the city square, including the duo ARTBAT. Our journalist Olena Pobochii went to the Lithuanian capital as part of the Ukrainian delegation to see how Lithuanians support Ukrainians and what is the reason for their desire to help.

As part of the events organized by the Ukrainian Association of Musical Events (UAME), funds were collected for the charity initiative Music Saves UA, which, among other things, helps with the evacuation of people from the front line and humanitarian aid to Ukrainians affected by the war. During the event, UAME collected more than 1 million hryvnias, and the collection continues to this day — you can join using the link. 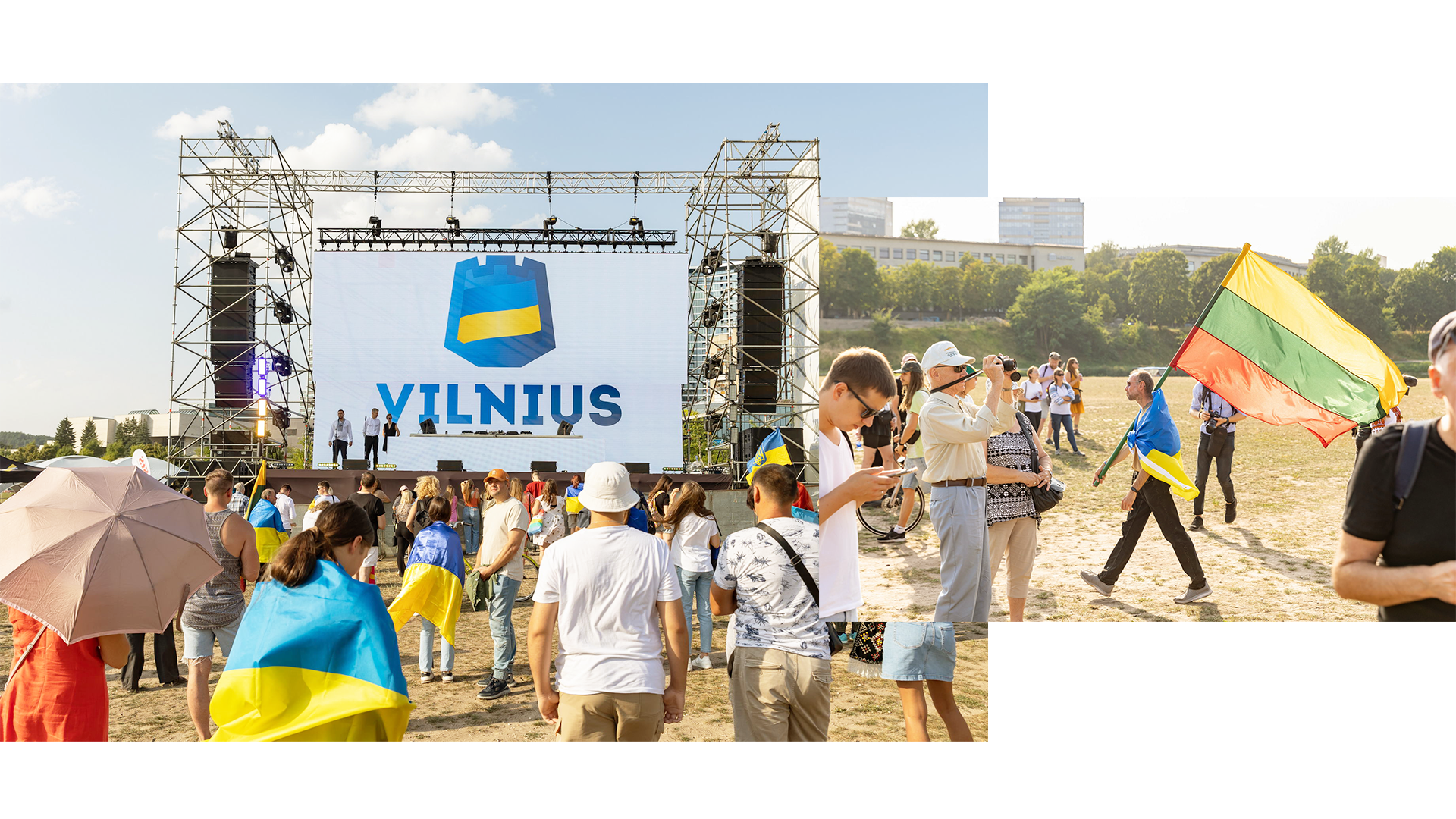 My train is about to stop at the central station of Kyiv. I look at my thousand packages with gifts, at the crowd already queuing up to get out of the carriage. I know I’m back.

I am leaving the station. The capital meets with a cool cloudy morning, exclamations of taxi drivers, and a bunch of militaries. I look around and see a large blue-yellow banner on the station building. It causes me to smile — these colors meet me in every city I’ve been to in the last 5 days. Sometimes even more often than in Ukraine.

How did that happen? What motivates people in other countries to take the Ukrainian situation so seriously, and sympathize with our citizens so much? Lithuanians who celebrated this year’s Independence Day of Ukraine with no less enthusiasm than Ukrainians gladly answered this question.

Lithuania is one of the largest Ukraine-friendly states in the context of our relations with Russia. It has been actively advocating the imposition of sanctions against the Russian Federation since 2014. After the beginning of a full-scale invasion, it officially recognized Russia as a terrorist country. According to the Forbes Ukraine assessment, Lithuania is among the five countries that help us the most during the war (among the criteria are the number of expelled Russian deputies, assistance to Ukraine and refugees, and international visits).

Since the beginning of the full-scale Russian invasion of Ukraine, Lithuania has shown a great desire to help both forced refugees from Ukraine and the military. First of all, this is due to the historical memory of Lithuanians who for decades fought for independence from Russia.

During the 19th century, there were several rebellions in the Lithuanian Principality, violently suppressed by the Russian Empire, and in the 20th century, Lithuania was put in a stalemate and annexed to the USSR. However, Lithuania has not stopped fighting for its statehood.

The terrorist country caused a special trauma to Lithuania at the beginning of World War II, deporting 17,000 civilians to Siberia — that was the way how the USSR suppressed the resistance of local intellectuals. This was the first of a series of targeted genocides of Russia against the Lithuanian people (about which I, by the way, first learned from the autobiographical book Between Shades of Gray by Ruta Sepetys, an American writer of Lithuanian origin). This is very similar to Ukrainian history because the extermination of Ukrainian self-identity was one of the main tasks of Russia for many years.

The last attempt of the aggressor to seize power in Lithuania took place in January 1991 and resulted in human casualties. At that time, Soviet troops tried to storm the Vilnius TV tower and cancel the independence declared by the country. This arrogant brutality has put an end to the attitude of the Lithuanian people towards Russia. 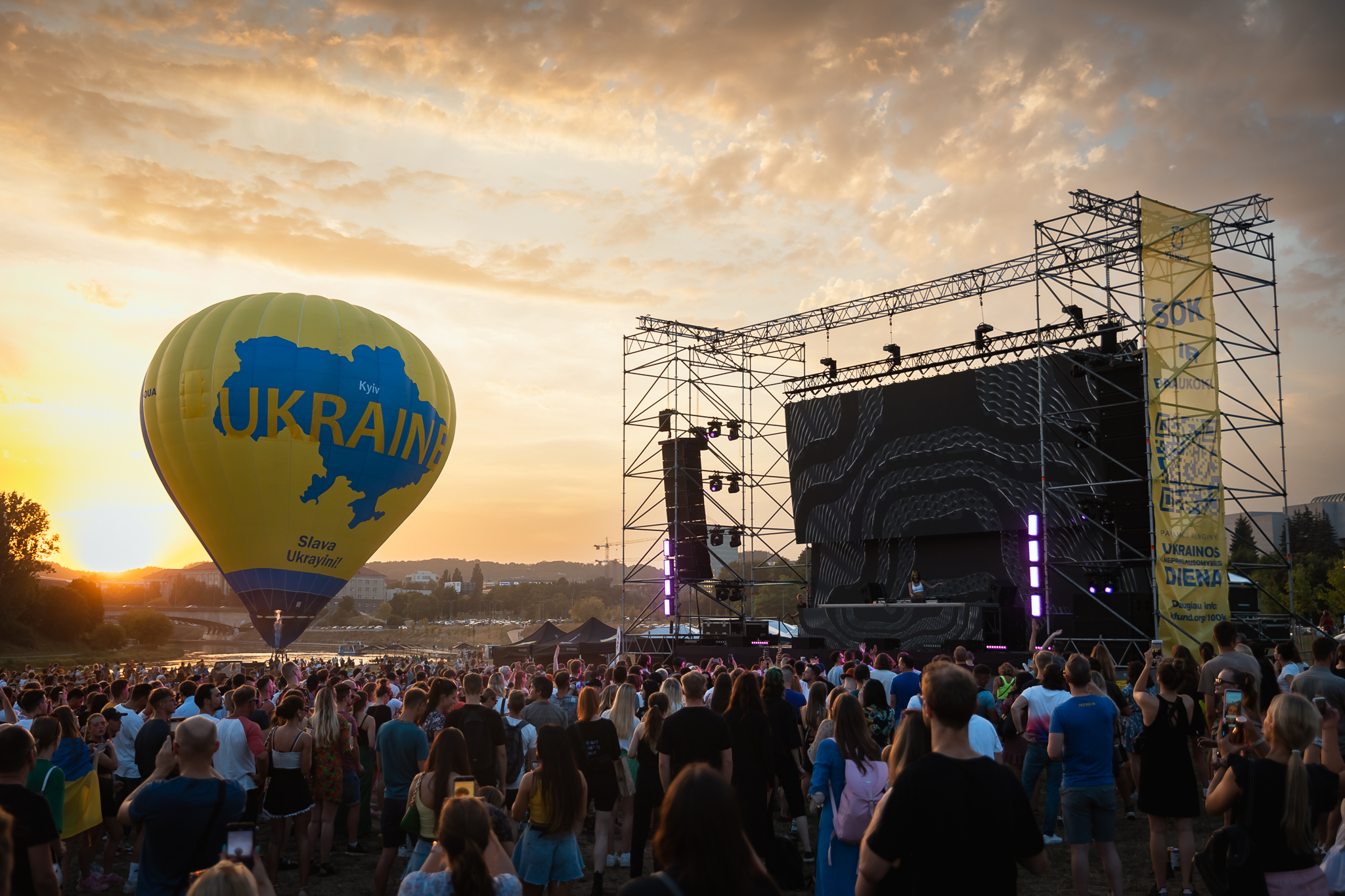 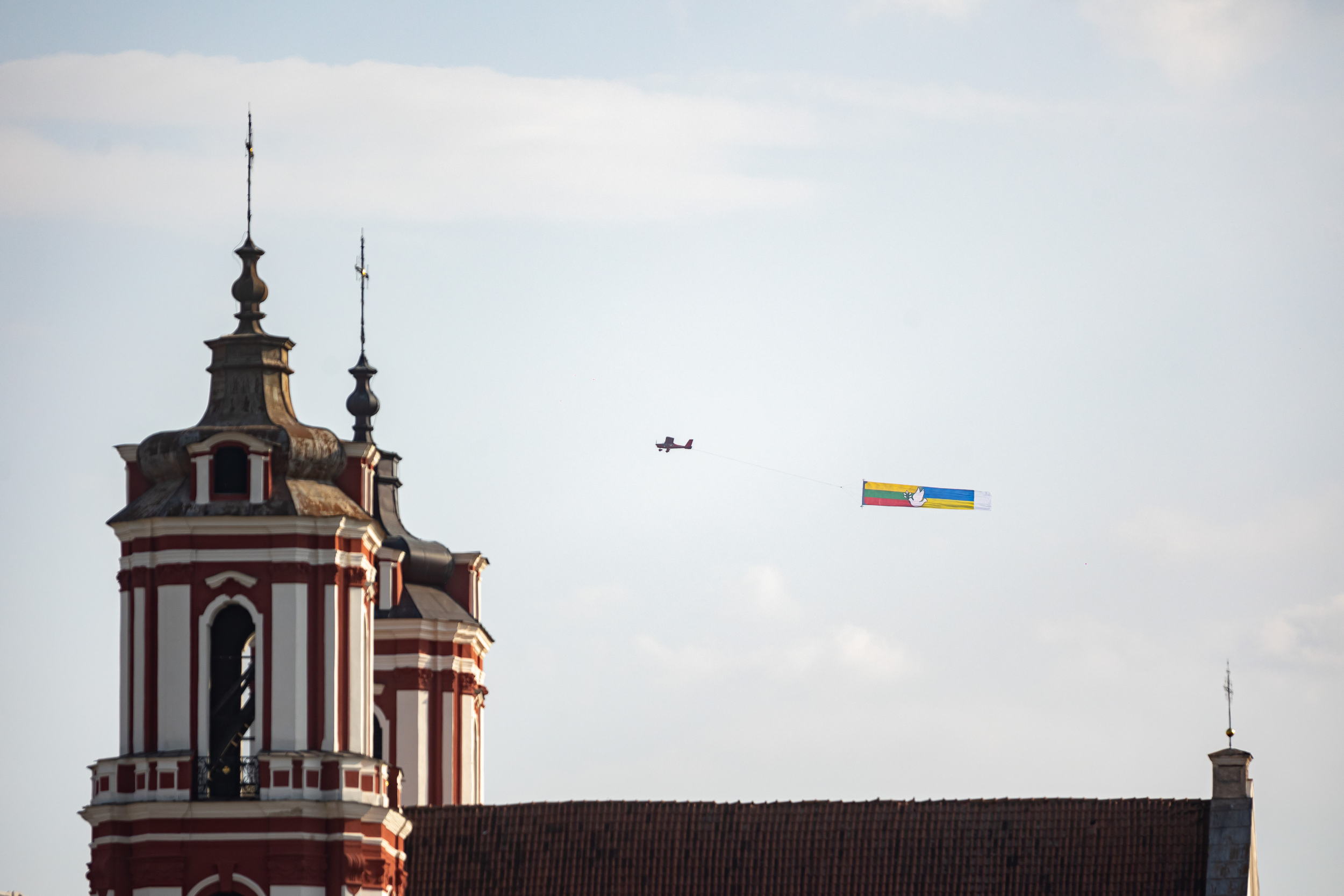 The city is filled with tourists enjoying the last summer sun. Passing by a variety of cafes and shops, I cast a glance at the walls and windows of the exquisite houses of the old town. I feel some dissonance, remembering where I am — every few meters I meet Ukrainian flags in various interpretations. In the central Town Hall Square, you can hear the noise — the musicians are holding a soundcheck on the stage decorated with large blue-yellow flags.

I arrived in Lithuania together with the AUkrainian Association of Musical Events (UAME). In Vilnius, big music events are being prepared for the Independence Day of Ukraine. The events themselves are free to attend but to raise additional money for evacuation of people and humanitarian aid, UAME sells Ukrainian symbols. These are flags, bracelets, and T-shirts at festivals and events throughout Europe. The funds go to the Music Saves UA.

The largest event with the participation of Ukrainian DJs is held in the meadow near the White Bridge — a spacious platform near the Neris River, where Vilnius residents often spend their leisure time. The start is scheduled for 17:00, but people are gathering earlier. UAME team decorates an awning not far from the scene with photos of shattered Ukrainian cities and evacuated people, hang infographics about the consequences of the Russian invasion, and photos of artists currently protecting Ukraine at the front. On the tables are Ukrainian flags and bracelets with the inscription “Slava Ukraini”, on the hangers — are T-shirts with the same slogan and calls “Be brave like Ukraine”.

We have been striving for freedom for a long time, and we perfectly understand how important Independence Day is for Ukrainians this year when for six months they have been fighting for this very thing — for the right to be citizens of a free, independent country.

The courage and determination of Ukrainians are inspiring, and the least we can do is not tire of providing them with all sorts of support,

Mayor of Vilnius, Remigijus Šimašius, says from the stage. At this time, a plane with the flags of Lithuania and Ukraine is flying in the sky. 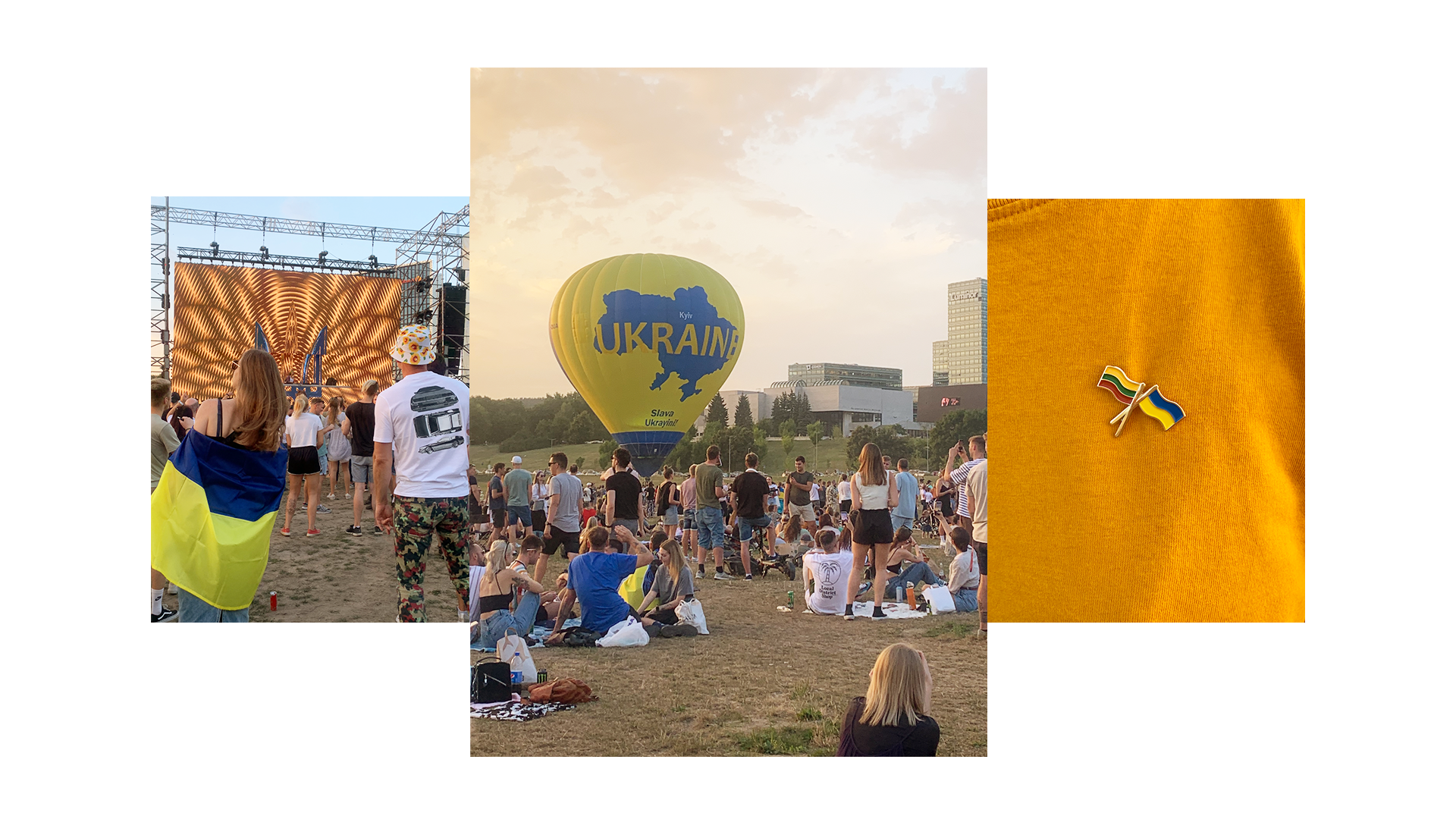 I arrive an hour from the beginning and I am impressed by the number of listeners. They sit, stand, and dance wherever the eye reaches. The crowd is flaunting in yellow and blue. Almost every person has something with Ukrainian symbols — a ribbon, a flag, a bracelet, a badge, and Ukrainian wreaths. In the UAME’s awning, the girls are smiling and telling what a stir it was half an hour ago. Everyone — Lithuanians and Ukrainians alike — wants something that reminds them of Ukraine on Independence Day.

What do the Vilnius people who gathered at the concert today think? I approach the girl with a badge in the form of crossed Ukrainian and Lithuanian flags. Elzbieta is a student who, together with her friends, supports pro-Ukrainian initiatives:

I send my donations every day. I am very sorry for what is happening in Ukraine, and we understand the severity of Russian oppression like no other. 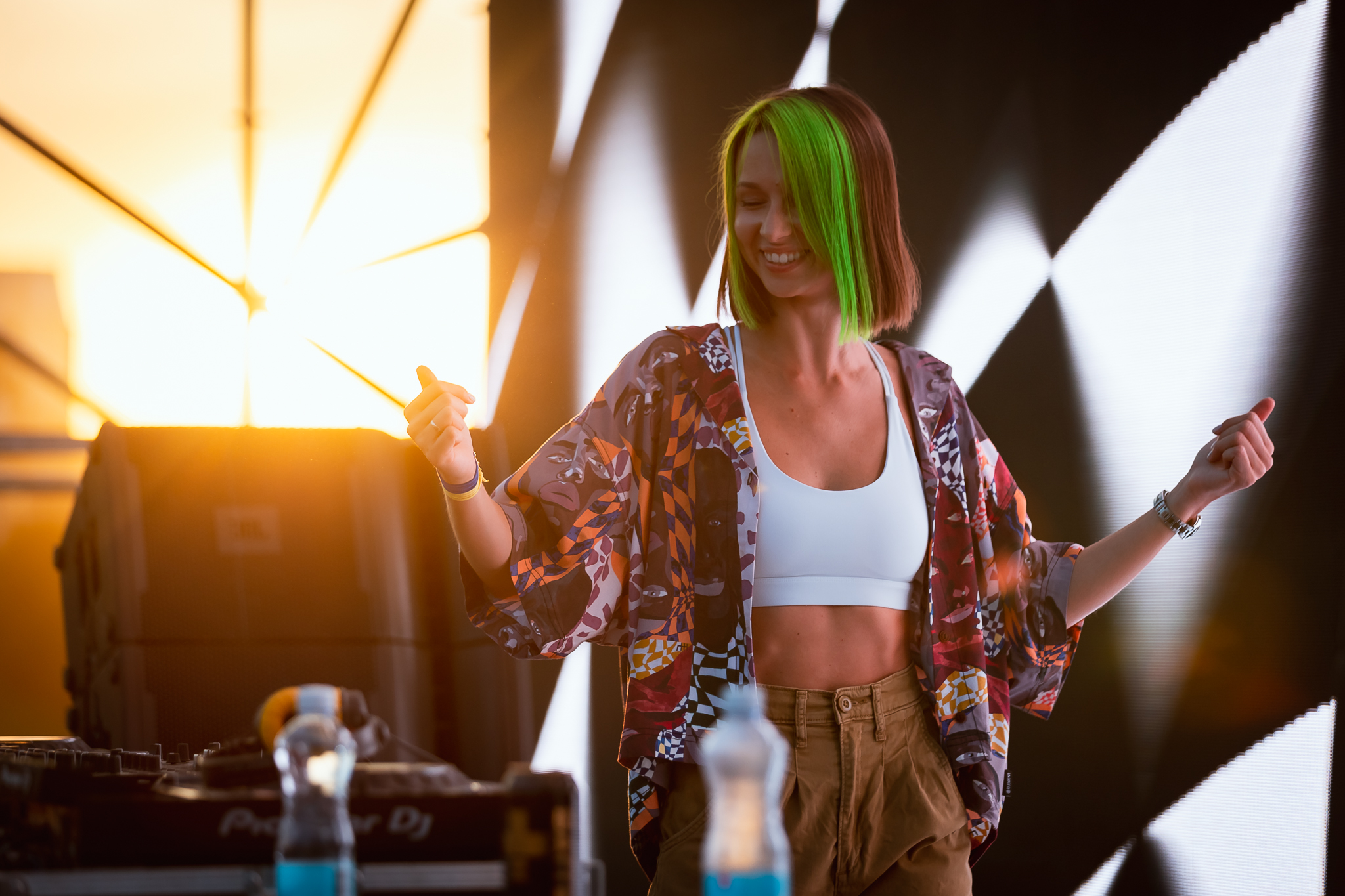 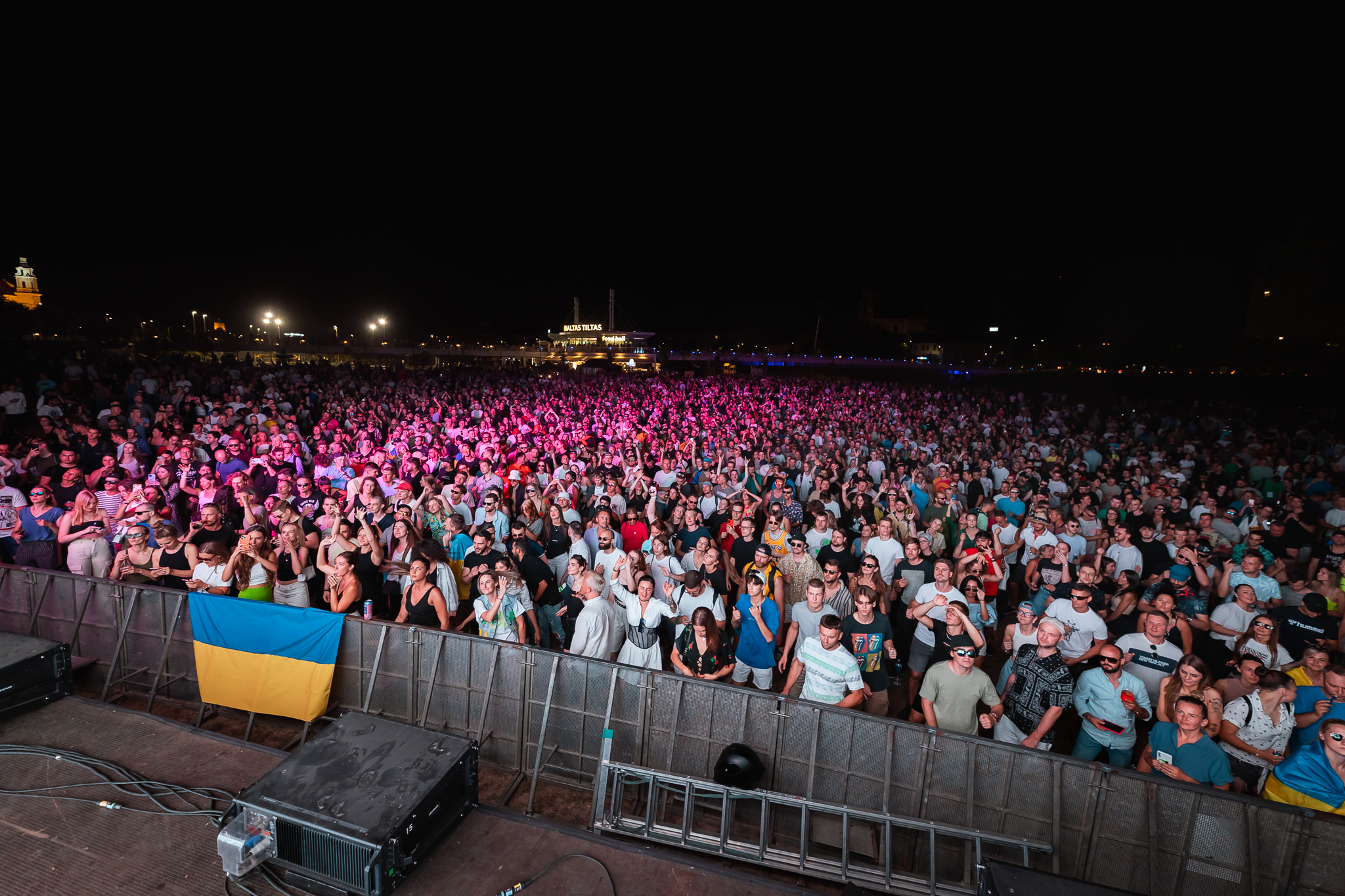 When asked where a girl works to be able to donate, she answers that her main income is a university scholarship.

Somewhat impressed, I meet other people around me. All of them have different stories, but  share a common opinion — Lithuania understands Ukraine best and supports it the most.

“This is the most comfortable country for me as a refugee,”

“I take part in every possible event in support of Ukraine,”

Mykolas, a volunteer from the concert, says.

One of the initiators of the celebration of the Independence Day of Ukraine in Vilnius is the Night Mayor (responsible for night and evening events) of the city, Mark Adam Harold. In his words, his love for our country began with his first visit in 2015. Then he conceived a program to help fight corruption in Ukraine and made several films on this topic. When Russia invaded, he used the position of night mayor to organize events to raise funds for Ukrainian needs. 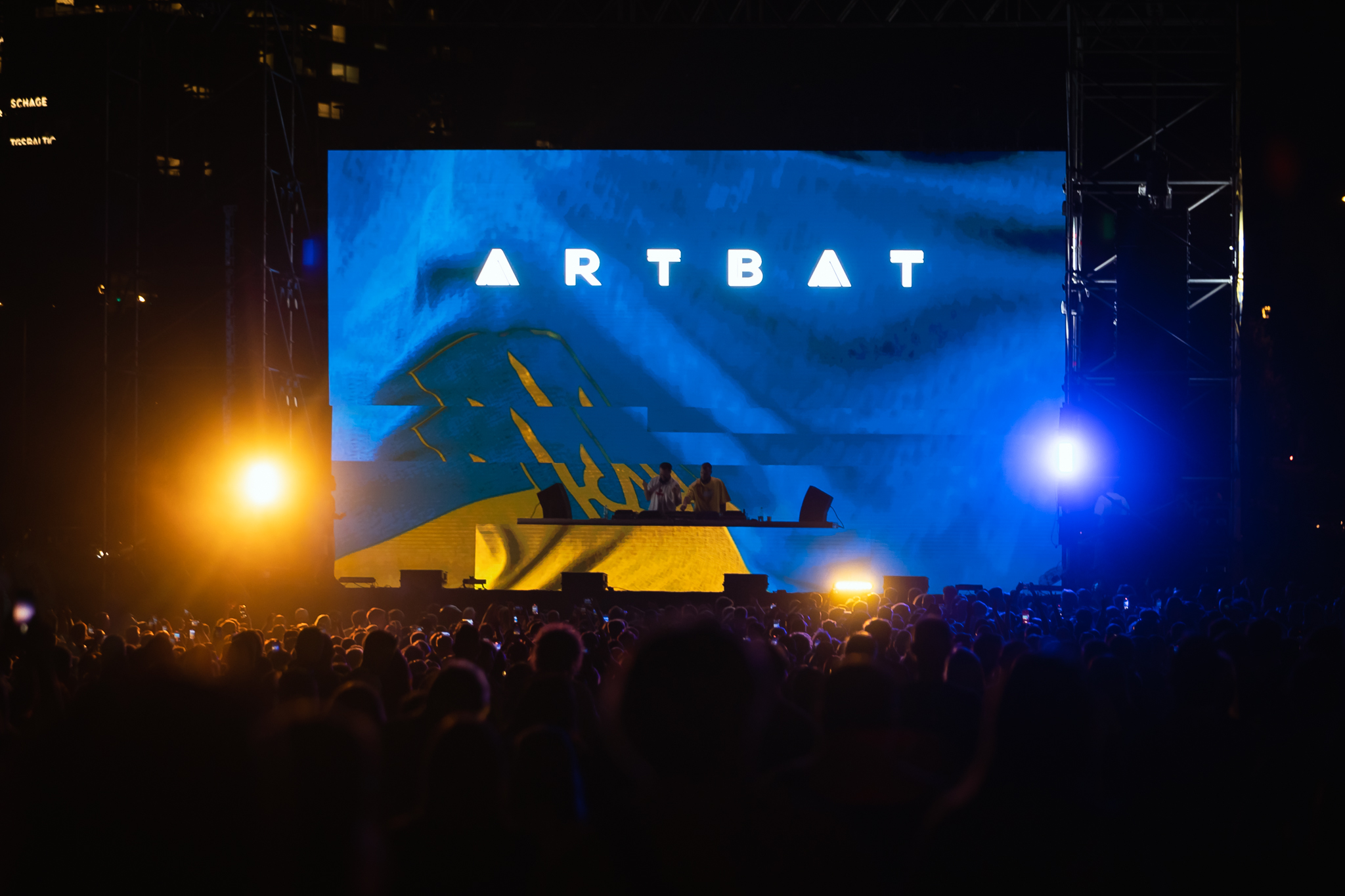 What I realized during my trip to Vilnius

Close cooperation between Ukraine and Lithuania is due to the common historical memory, which now is encouraging residents of both countries to distance themselves from any manifestations of Russia as a partner state and a cultural unit as far as possible.

The long-term influence of the aggressor on Ukrainians and Lithuanians caused huge human and cultural losses, but never achieved its goal of enslavement and humiliation.

Today, our countries have long-awaited independence. But Ukrainians continue to fight. The sooner we will get rid of everything that has to do with Russia, the sooner we will find our way of development and become a significant state unit not only in Europe but in the world as well.