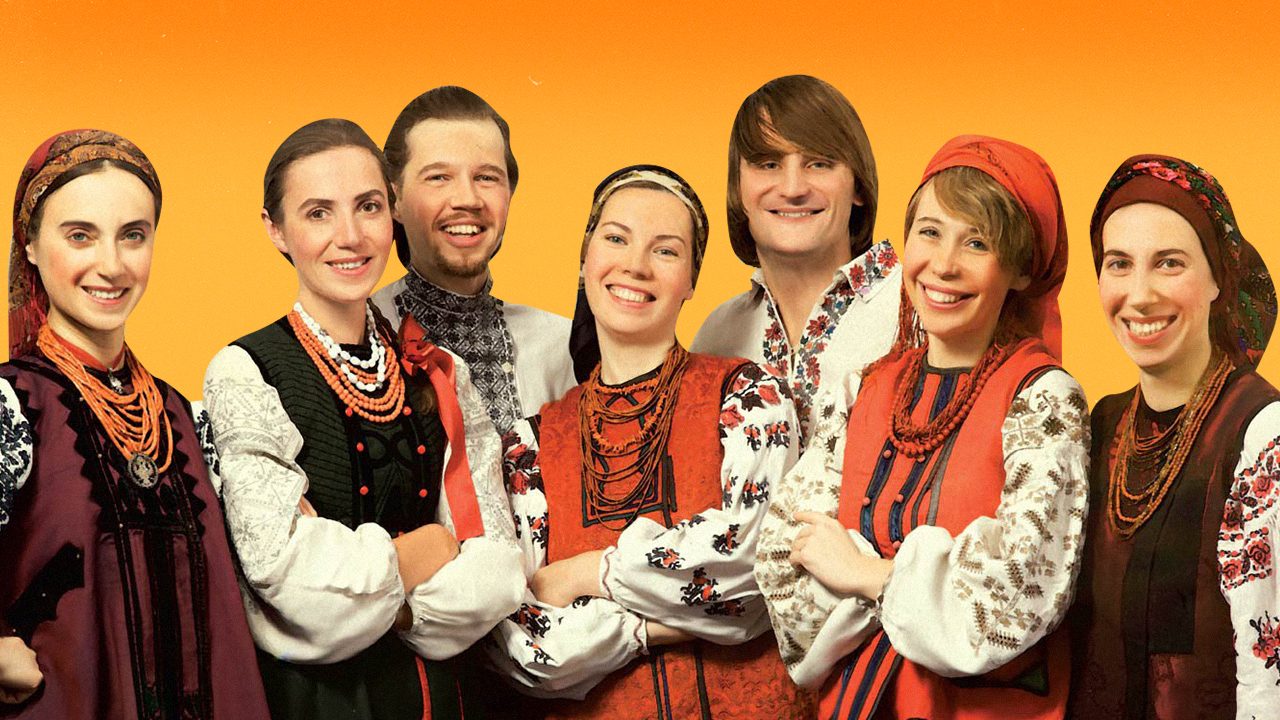 The way the Ukrainians took their own national identity after the 2014 Revolution of Dignity events gave rise to the skyrocketing of new Ukrainian folk art manifested in songs, painting and vogue. The popularity of artists who chose ethno-direction points that we, Ukrainians, are curious about getting to know more about our cultural history and learning traditions and customs of our ancestors.

We are going to tell you about folk bands retaining authenticity and making the folk genre fashionable. The main area of their activity is to study the singing traditions of our country. They go on explorations to different corners of Ukraine, gather texts and learn techniques of their performance.

The youth folk band was formed at the Ivan Honchar Museum of Kyiv at the end of 2018. Its name embodies one of the most popular images of Ukrainian folklore which is pike fish that symbolises the birth of life. The pike can be found in the motifs of Ukrainian folk Christmas carols and New Year’s songs, wedding songs, fairy tales. The main intention of the singers and musicians is to bring the folk genre into vogue for a young audience.

ShchukaRyba formation often appears on the stage at different events, in particular at folklore festivals and national celebrations. They are also known for their frequent cooperations with Alina Pash.

The origin of the word-name was lost for 23 years the band has been existing, so the members incline towards ‘Bozhi people’ (‘God’s people’) and pursue to convey part of the Ukrainian soul through every song of theirs.

One of the main areas of Bozhychi’s activity is to collect and record folk culture on a large number of expeditions in most areas of our country, including Crimea. The main specialisation, as the members of the band claim, is to reproduce the singing tradition of left-bank Ukraine.

Besides songs, the band retains dance and instrumental traditions and teaches anyone who wants to join in their own school of traditional dance. Since 2001 Bozhychi band has been engaged in theatrical arts with putting on plays based on stories harvested during the expeditions.

The Kyiv folk band called Oreli (the word stood for ‘swings’ in ancient times) is the outcome of different generations’ interaction and transmission of folk traditions to the youngest Ukrainians. The ensemble works at Oreli school in the National Centre of Folk Culture ‘Ivan Honchar Museum’. Children learn to play the folk instruments, including ocarinas, sopilka, violin, and master traditional singing and dancing from the age of two.

The children from the ensemble frequently travel around Ukraine and take part in folklore festivals, theatrical and ritual actions.

In recent years, the grown-up members of Oreli have formed a range of new youth bands, including the aforementioned ShchukaRyba band.

The youth folk band called Ladovytsi was formed in 1992 in Khmelnytskyi city. This is one of the first ensembles which began to revive the singing traditions of Naddnistrianske Podillia.

The members of the band are children and youngsters aged from 5 to 20 years who regularly explore rites, customs, folk costumes, dances and games in Khmelnytskyi, Chernivtsi and Vinnytsia Oblasts.

Over 30 years, more than 1000 authentical folk songs were collected in 70 villages by the efforts of Ladovytsi: soldier’s, chumak’s lyrical, ritual and household songs. Some of them are rerecorded and released by the band as albums.

The group is constantly involved in folk festivals and competitions, with initiated its own in 2016. The first Ladovytsi festival took place in Khmelnytskyi city and drew bands from Poland and Georgia. 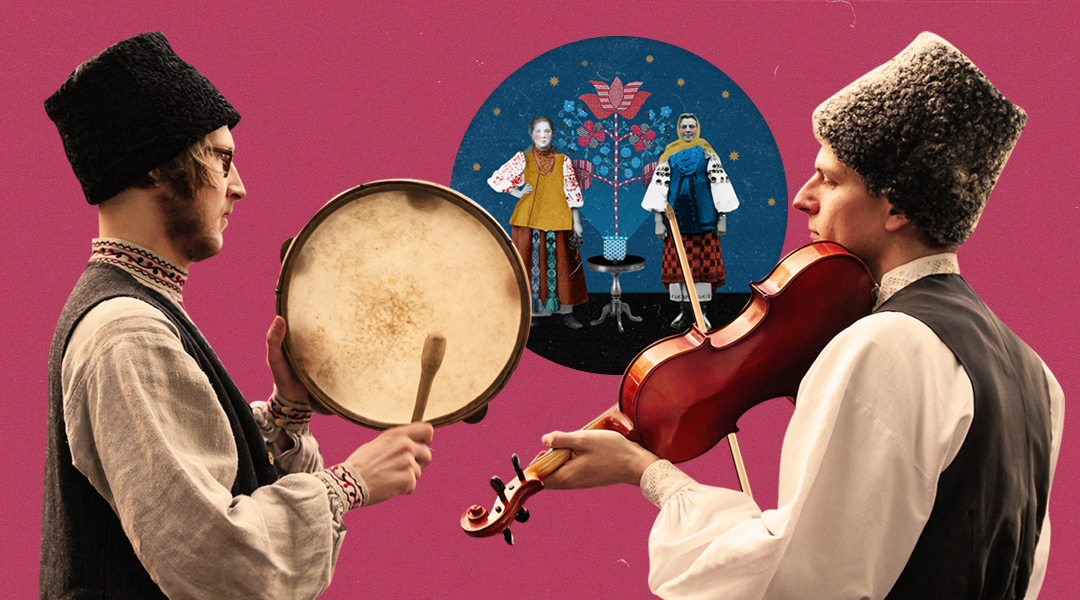 The folk ensemble, which is more than 100 years old, was formed by Kyiv Conservatory students in 1979. At that time, young people decided to reproduce folk songs heard in villages during the folk expedition.

The first to be studied were chants of Kyiv’s Polissia and polyphony of Kriachivka village (Poltava Oblast). For now, their repertoire includes a bunch of songs from Polissia, left-bank Dnieper Ukraine, Eastern Podillia and Chornobyl zone, besides that the members reproduce every track in several versions avoiding copied performance.

The Drevo band is supposed to be a pioneer of folk music direction in Ukraine. Its activity in the 1980s and 1990s gave rise to other famous ensembles such as Volodar, Otava, Bozhychi as well as DakhaBrakha ethnoband. The ensemble’s members constantly give Ukrainian folk singing lessons across European countries and perform at international festivals.

The band has been collecting and retaining Cossacks’ songs for 30 years already. It was formed by a few amateur singers who gathered and sang at home at first, then they decided to participate in festivals that made them more popular in circles of judges.

The singing material for the ensemble is collected in Dnipropetrovsk Oblast, and children from the Krynytsenka group are involved in reproducing the songs. The unique cultural heritage which is preserved by the ensemble’s members is taken under the protection of UNESCO.

It is the Kalynonka amateur group that made Lyman village prominent in Ukraine and abroad in 1990. Residents of the settlement often sing upon doing chores, work, at holidays, just at the table. Thus, listening to local senior women, the current head of the ensemble Olha Korniienko made up her mind to collect the songs together and take them to Sorochyntsi Fair and later to abroad.

For now, the group includes three generations of women who are specialised in singing traditions of Lyman village. It is one of the few bands that performs songs of one village bequeathed in family from older generation to the younger.

Spivocha Maisternia is a community that has been teaching, presenting and enamouring in traditional singing culture of Chernihiv Oblast for five years already. The Workshop’s peculiarity is the absence of a separate band and performance culture.

The guiding idea of the community, as the Head Vira Ibriamova-Syvoraksha says, is authentic singing where people are not divided into listeners and singers. The Workshop conducts regular group classes in traditional singing as well as mini courses.

Mainly songs from Chernihiv Oblast are studied in Spivocha Maisternia. For this, the expeditional recordings of senior women and men whose singing the participants try to reproduce prove valuable.