History of VIE Kobza. How Western music in Ukrainian was made behind Iron Curtain

No matter how strong the Iron Curtain was, at the end of the 1960s, Western beat music still made its way to the USSR and Ukraine. For the most part, it was a simplified British version of American proto-rock and roll. The party banned it and various genres of rock, such as big beat. Therefore, Ukrainian musicians combined the sounds of the free world with folk motifs as the Soviet government gave the green light to such a symbiosis.

Vocal and instrumental ensembles, VIEs, have become a breath of fresh air for Ukrainian culture. One of the first folk-rock bands of such kind in Ukraine was VIE Kobza, and they were called the “Ukrainian Beatles”. They played concerts throughout the Union and abroad, and the group’s records sold millions of copies.

Read about the rock stars of the Ukrainian scene of the 70s who made progressive music and how wild success did not stop their slow fading. 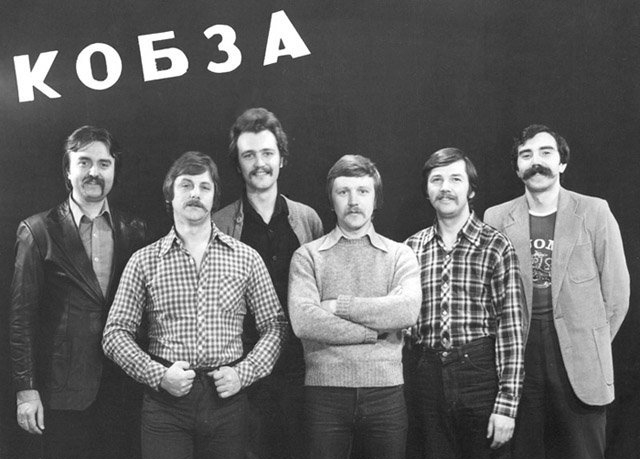 How it all began

Before VIE Kobza began touring the Soviet Union and beyond, the instrumental team was created in the late 60s by students of the Kyiv Conservatory – bandurists Kostiantyn Novytskyi and Volodymyr Kushpet. The group was led by the same student, the future composer Oleksandr Zuiev. The musicians played on instruments that were not quite common at the time – those were electric banduras, which inspired the band’s members to come up with its name.

“We saw our main task in the propaganda of bandura. We wanted to show the possibilities of this unique tool. That is why our band was named Kobza. By the way, we had trouble because of this and could not get it approved for a long time. I was even called ‘on the carpet’ by the then Politburo of the Central Committee of the Communist Party of Ukraine because someone ‘delivered a signal’ on us.

Some ‘philanthropists’ reported that a ‘hotbed of nationalism’ had appeared in the Kyiv Conservatory. We were offered to change the name to avoid the problems, but we were stubborn boys and did not agree, and were trying to prove that bandura is a spiritual symbol of Ukraine,” 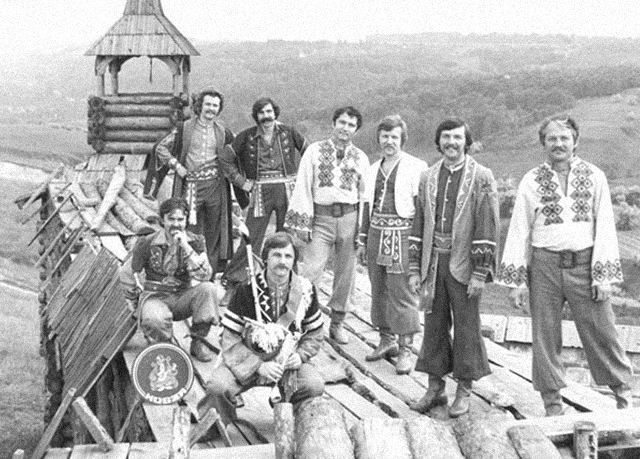 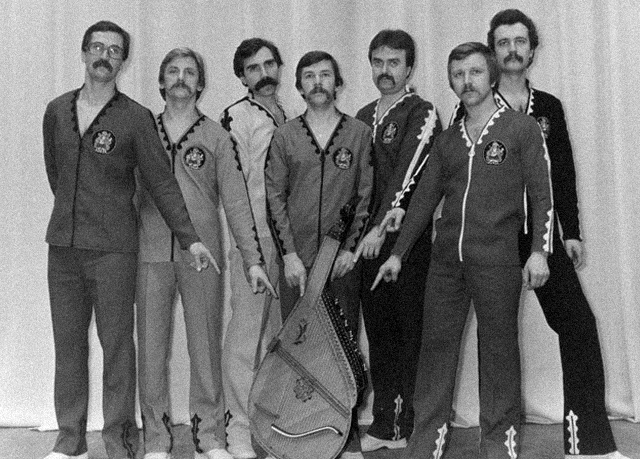 The year 1971 became a creative springboard for the collective. Then, VIE Kobza began their musical activity as part of the promotion organization Ukrkoncert. At the same time, the group was offered to accompany the singer Valentyna Kuprina during the recording of her record at the Kyiv studio of the Melodiya record company. Together they created three songs, and the studio management also liked Kobza’s own material. This is how the band had the opportunity to record their album.

To create the first Kobza’s album, vocalist Valerii Viter was specially invited to record songs. At that time, he was a student at the Kyiv Art Institute and the lead singer of the big-beat band Berezen. The following people took part in the recording of the first songs of Kobza: Oleksandr Rogoza (bass guitar), Oleksandr Zuiev (keyboards), Valerii Viter (vocals), Kostiantyn Novytskyi and Volodymyr Kushpet (bandurists), Heorhii Harbar (flute, pipe), Anatolii Liutiuk (percussion).

The album includes Ukrainian folk songs in a modern arrangement, works by Oleksandr Zuiev and other composers. Among them are Oh by the lawn, by the lawn, On Ivan Kupala, Three Trembitas, And We Are Two, etc.

The first recording of Volodymyr Ivasiuk’s cult song Vodogray was also part of the album. It was performed by Kobza and Valentyna Kuprina.

The band sounded somewhat different from the rest of VIE. Their highlight was folk musical instruments, namely electronic banduras instead of electric guitars, as well as polyphonic vocal accompaniment, which was rare for pop music at the time.

Valerii Viter is an artist who sings 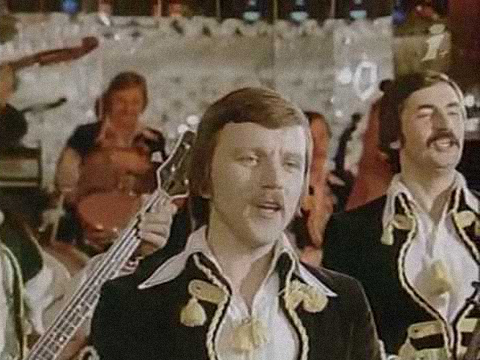 Valerii sang and drew since his childhood, but it was the latter that he wanted to do professionally. He studied at the Taras Shevchenko Kyiv Art School, and then received higher education at the Kyiv Art Institute (today it is the National Academy of Fine Arts and Architecture).

Singing accompanied Valerii at the institute as well – in parallel with painting and art exhibitions, he participated in an amateur ensemble and sang in the choir of the October Palace. Thanks to the latter, Valerii Viter met Serhii Paradzhanov. The director was looking for a young vocalist for his film Ukrainian Rhapsody. Valerii’s ringing voice was chosen from a hundred other candidates.

When Viter was a part of the Berezen band, he and the other band members met Nina Matviienko. At that time, she sang in the Hryhorii Verovka choir. In 1972, Berezen was allowed to work in a radio and television recording studio, and the musicians, together with Matviienko, recorded approximately eight songs in one session. At that time, it was the first duet of a folk singer with a rock band in Soviet Ukraine.

In the early 1970s, the Soviet authorities began to suppress Berezen. Then Valerii Viter only joined VIE Kobza and, in parallel, continued to sing in Berezen, but he did it secretly because he was afraid it’d cause a fight with his fellow musicians. But everything turned out without conflicts. The latter let Valery go to the new team.

Once the guys from Berezen came to a rehearsal at Kobza and ceremoniously handed me over to the new band,

— Valerii Viter said in an interview for Ukrainian Pravda newspaper.

But Valerii not only sang in Kobza; his artistic talent also came in handy for the band. Viter designed concert costumes for members of the collective and for other performers of Ukrkoncert. The artist also created sketches of fonts for Kobza’s records. 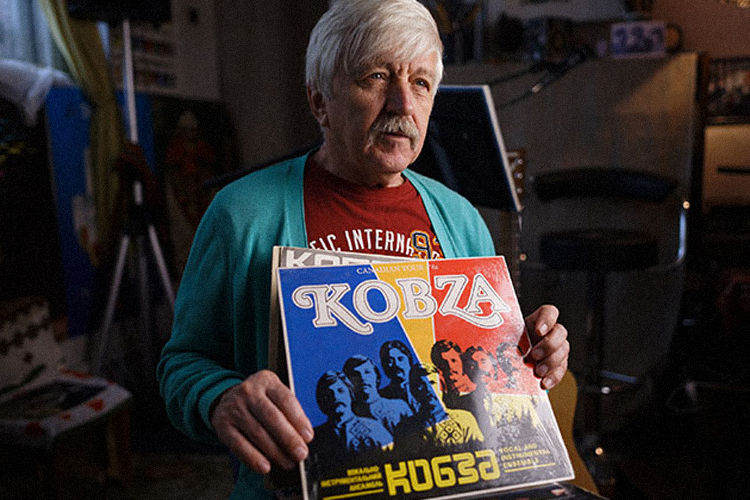 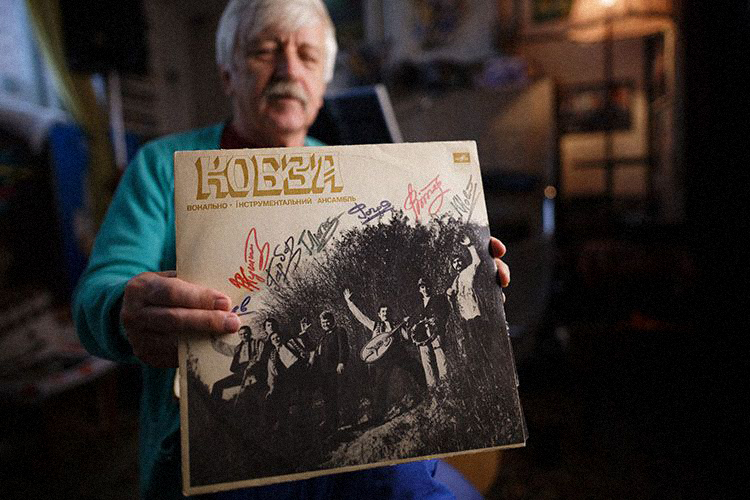 After a 16-year musical career, in 1987, Valerii Viter left the band and devoted himself to the visual arts. The artist still paints, and his works are kept in galleries in Ukraine and abroad, in Germany, Austria, Belgium, Bulgaria, the Czech Republic, France, Japan, and the USA.

In 1973, Kobza officially solidified its first success – the band took third place at the All-Union Competition of Vocal and Instrumental Ensembles in Minsk. Ukrainian musicians shared it with the Moscowites collective. The second place was not awarded to anyone, and the Belarusian band Pisniary won first place. Such a victory opened opportunities for the band to perform not only in Ukraine but throughout the USSR. A year after the competition, its artistic director, Oleksandr Zuiev, left Kobza. After that, the ensemble was headed by its members: Oleg Ledniov and Kostiantyn Novytskyi respectively. Eventually, Yevgenii Kovalenko took the place of the musical and later the artistic director. For the musicians, he was not a new member of the team, because even before that he wrote Kobza’s arrangements of folk songs.

Against the background of the band’s success and the popularity of the first album, the members of Kobza began to feel the pressure of the Soviet authorities. Initially, the Communist Party encouraged the creation of the VIE but hoped for superficial and sloppy results. Accordingly, when a fashionable, authentic, “bourgeois” scene began to take shape in Ukraine, the leadership of the USSR began to tighten the screws. This was especially noticeable when, in 1972, the First Secretary of the Central Committee of the Communist Party of Ukraine, Volodymyr Shcherbytskyi, led Soviet Ukraine.

“After the release of the album, no one laid a finger on us. There was no reason. Because Kobza never sang the songs of UIA [Ukrainian Insurgent Army]. But in those days, we didn’t even know them. Everything changed when Shcherbytskyi came to power. Everything in Ukraine suddenly became pro-Moscow.

The new Ukrainian Radio editor-in-chief believed that Kobza distorts the folk song, so for several years, we had not been played anywhere at all. They didn’t let me go abroad either. Although invitations to Ukrkoncert were constantly coming from Canada, there was no response to them. Because of this, rumors spread that we are already sitting in the camps,”

— Valerii Viter said in an interview.

Kobza’s release into the world

In 1977, the Soviet noose weakened somewhat, and musicians began to breathe more freely. At the same time, VIE Kobza performed in Slovakia’s Bratislava on their Days of Kyiv. The end of the 1970s was the peak of the band’s popularity. By that time, the ensemble had already released a second record with arrangements of folk songs and original works by Ukrainian composers. The album included Oh, I went for the sheaves, Duma, Schedrivka, Farmer walked in a clean field, I threshed on Saturday, Oh, grove, grove and others.

The Ukrainian big beat was liked by the mass audience. Kobza gave 200–300 concerts a year throughout the Soviet Union, from Chop to Vladivostok. The group also began to perform abroad; their tours were scheduled five years in advance. Kobza sounded in Czechoslovakia, Italy, Finland, Germany, Poland, and Japan. The band became the first USSR collective to go on commercial tours to the American continent. VIE Kobza was especially popular in Canada and Cuba.

During the existence of VIE Kobza, its staff changed periodically. For example, one of the band’s founders, Kostiantyn Novytskyi, left due to his non-traveling status. Other members left the team to work on their own projects or to focus on their families. In the late 1980s, Kobza experienced a creative stagnation because the ensemble leaders often changed, but the concert programs remained the same. At the same time, vocalist Valerii Viter left Kobza.

In the late 80’s, kobza constantly changed managers. You look at him – a normal guy, but once he has been appointed as a manager – that’s it, he becomes smug, starts to drink. And we sang all the same – both us and the listeners got sick of it eventually. Less and less people cam to the conserts. I realised i was tired, and in 1987 i wrote resignation letter,

For some time, Kobza still toured, from the end of the 80s until the beginning of independent Ukraine, but no one left from the original band. And in the 2000s, Valerii Viter assebled the orinigal Kobza. Its first members returned to the team. Together, they recorded new arrangements of songs and performed them at festivals. The band still exists.

The gradual decline of the USSR added to the creative stagnation — the cultural sphere began to degrade along with it. VIE was disappearing, and new talents in underground music could not break through the thick wall of Soviet censorship to the masses. It was obvious that Ukrainian culture needed a new breath of life and some changes. They became the first all-Ukrainian festival of modern song and popular music, Chervona Ruta, in 1989. 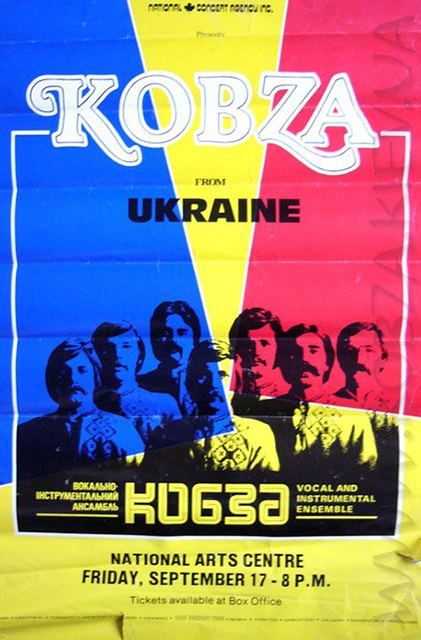 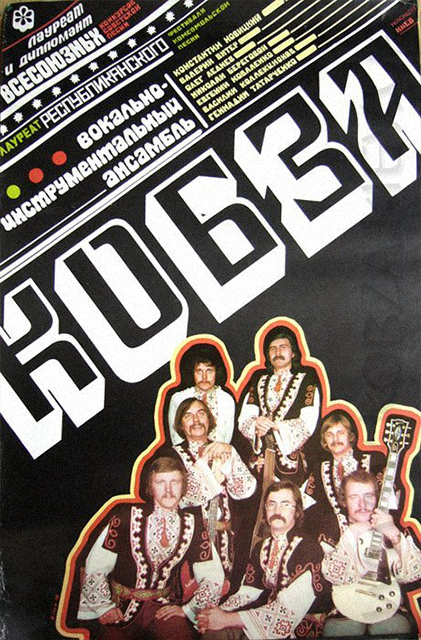 Amidst the prosperous bloom of the vocal-instrumental ensemble Kobza, it was possible not to get lost, because the team developed its own style and sound. Like the rest of the young Ukrainian musicians of that time, the band took advantage of a narrow gap in the Soviet cultural wall and created fashionable music, which was sorely lacking in the Ukrainian scene.

Photos from Valerii Viter’s interview with the Ukrainian Pravda newspaper.